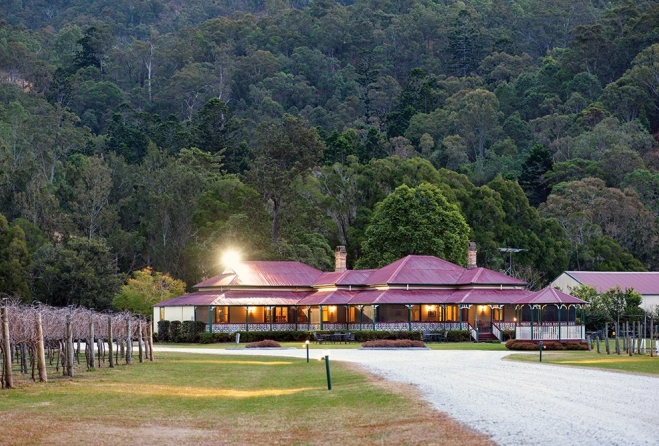 O'Reilly's Canungra Valley Vineyards are a slice of paradise nestled at the base of Lamington National Park, just outside the charming country hamlet of Canungra.

Whilst the vineyards are known for the fabulous wine that you can buy direct from their cellar door, it is also a great destination for day tripping families, with so many unique and interesting things to do here.

The picturesque grounds surrounding Canungra Creek are perfect for young adventurers to explore, with a chance to spot wildlife including eels, turtles and even platypus in the creek.

Along the banks of the creek you'll find scenic picnic spots where you can enjoy a bottle of wine and a gourmet picnic basket, cheese board, stone-baked pizza or fishermen's basket from the onsite kitchen. (Currently, due to COVID-19 regulations, you'll need to BYO picnic rug).

Also located creekside on the property is the Mountview Alpaca Farm, where visitors can get up close to, feed and walk an alpaca through the entire grounds of the property including the vineyards, lawns, and along the creek. Or, for the ultimate experience, you can even book a picnic with an alpaca!

As for the stunning homestead, it was built in Warwick in 1858 for the Devine family, who lived in it for 65 years. In 1989 it was cut into three sections and moved to its current location, where it has been faithfully restored, retaining most of its original  period features. The story goes that there is a resident ghost, a lady whose picture can be seen hanging in the hallway to the property. She was standing next to the photographer when the picture was taken, only to die a couple of months later. When the photo was developed, she showed up in the picture.

Of course, no trip to the vineyards is complete without a visit to the cellar door. Last year, to celebrate their 20th anniversary, the vineyards launched a commemorative ‘Canungra 20’ Shiraz, so while there, be sure to pick up a bottle or two to take home.

Need to know - If you'd like to turn a day into a stay, O'Reilly's Rainforest Retreat is just up the road.

Destination Gold Coast is a valued partner of Must Do Brisbane.com