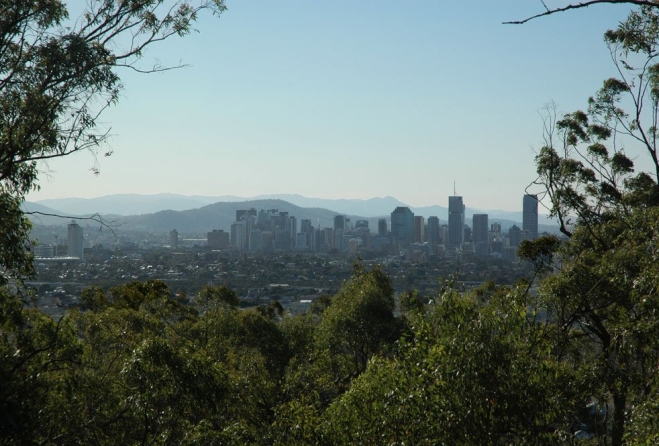 Walkers have a choice between the 1km Whites Hill circuit or the 2km Sankey’s Mountain circuit, both through open eucalypt forest and both relatively easy grade and suitable for strollers, and the first for wheelchairs. The trickiest part is connecting with them from the car park as there are playing fields and parklands to be traversed before the tracks materialize at different spots at the base of the hill.

1. Whites Hill Circuit – 1km – This is an easy walk considering it leads in a short time to a fetching view of the city, framed by bush. The path, via the Tallowwood track, starts about halfway along the playing fields to the left and heads gently up hill before taking a hairpin bend. A short distance along is a path to the left to the Whites Hill summit. From here loop back and head straight downhill via the Acacia track, followed by a sharp right into the Bloodwood track and the first right from there arrives almost immediately back at the playing fields.

Interestingly - although cold comfort to today’s walkers - there was once a teahouse here at the summit of Whites Hill, that was part of the family home of the Whites who owned 120 acres here. Robert White built the grand home in the 1870s and until the early 1900s had it open to the public for meals and tea. He enlivened things considerably when he bought a music machine, telescope and a camera obscura and projected views of the city skyline onto a house wall. Parties, weddings and gaieties ensued as the public embraced the privately owned house of fun. The council tried to buy the land for development in the early 1920s but Robert refused to sell, staying in the house until he died in 1927 whereupon the council promptly snapped it up. Although the house was used as an observation post in World war II the council let it fall into disrepair and eventually demolished it in 1964.

2. Sankey Mountain Circuit – 2km - This is hardly a mountain, being much the same as Whites Hill in elevation. The wide stony track starts at the end of the playing fields before veering left to join Sankey’s Circuit, which takes around an hour. After a way along this, the Bloodwood track, turn right onto the bitumen path which leads to the Sankey Mountain lookout. Head back and continue to the right where its downhill for a way along the Brushbox track and bypass all of the street exits, cross the footbridges and cross over the gullies via the Stringbark track and loop back around to the Bloodwood track which has a turn-off back to the playing fields.