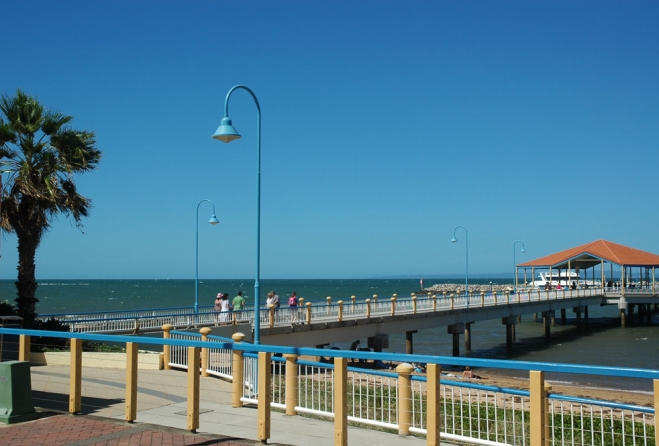 Redcliffe, the red sand fringed peninsula that was once the number one seaside destination for holidaying Brisbane residents, is enjoying a renaissance, thanks to a world famous pop group and the rediscovery of its natural charms.

With its name derived from John Oxley, who dubbed it ‘Red Cliff Point’ after sailing past on his travels, it enjoyed a brief one year stint as Queensland’s first penal colony in 1824 before malaria and insect borne complaints drove the settlement inland to what is now Queen St, Brisbane. By the 1860s, it had become a pastoral district and then in the boom time 1880s it was discovered by day trippers and holiday makers who were transported by paddle steamer to the jetty. In 1935 the first Hornibrook Highway (the remnants of which are visible by traffic heading in to Redcliffe), the longest bridge in the southern hemisphere and second longest in the world, was completed, with motorists travelling suspended over water for 2.64 km.

In 1958 the Gibb family emigrated to Redcliffe Peninsula, with three of their young sons Barry, Maurice and Robin already writing and playing music and it was at the Redcliffe Speedway that they had their first break, which would set them on the road to the super-stardom as the Bee Gees. And it is their tribute walkway The Bee Gees Way, curated by and opened by surviving Bee Gee Barry Gibb in February 2013 that has tourists flocking to Redcliffe as they did 100 years ago.

Start the day with a visit to Pelican Park, Clontarf, where at 10am, 365 days a year, pelicans gather for a feeding frenzy, a spectacle that ranges from small to mega. For walkers this is a great place to leave the car and take the Clontarf Redcliffe coastal walk, a scenic and at times hilly promenade that takes in the Woody Point Jetty, the Gayundah Wreck, Norfolk Pine lined coves, the English style Margate foreshore with its art deco and Spanish Mission bathing pavilions and via Suttons Beach to the quaint seafront stretch of Redcliffe Parade.

This is also a scenic drive as the road hugs the beach most of the way via Clontarf and Woody Point, with recommended lookout points at the Gayundah wreck, the jutting out picnic shelters of Margate and Suttons Beach.

At Margate, there are two refreshment stops that come recommended: Old Corner Shop and The Sebel Margate.

From Suttons Beach, take the low road to Settlement Cove, home to playgrounds, BBQs and an enormous tropical seafront  lagoon, which in summertime gets packed with swimmers, or take the high road to Redcliffe Parade.

For eats, try Cafe Diversity with its stunning views. The Comino's Arcade beneath the heritage listed Comino’s building (which has a rich history dating back to 1941) is one of two quaint tiled time warp arcades worth a look, (the other being the neighbouring Jetty Arcade).

A few steps further along Redcliffe Parade , opposite the giant revolving ring sculpture, is Bee Gees Way, the outdoor photographic gallery depicting the life of the Bee Gees, with a bronze statue of the young brothers, frozen forever in a time when they played carefree and barefoot in the streets of their beloved childhood home Redcliffe.

The other attraction not to miss is a stroll out along Redcliffe Jetty, which, built in 1995, is the most recent of a series of jetties that have graced this spot since 1885. The Redcliffe Jetty of the 1950s, which had a penny arcade in the middle, was a haunt of the Bee Gees and was mentioned by Barry in a recollection that he wrote of his childhood in the area that is on display at the excellent Redcliffe Museum, located up on Anzac Avenue and which is also well worth a visit.

Those who don’t mind the odd bat encounter should take a stroll in the Redcliffe Botanic Gardens, a lush green oasis where in the rainforest section flying foxes hang in clusters like a collection of tiny vampires. Otherwise there’s a banksia heath, medicinal herb garden and a man made Chorizema spring with its own resident frog to check out.

And, if visiting on a Sunday, this is the day to catch the popular seafront Redcliffe Jetty Markets which stretch out along the foreshore on Redcliffe Parade.

Lastly, if after a souvenir that is not Bee Gees related, take home some great locally roasted coffee from the Neli Coffee roastery at Clontarf.